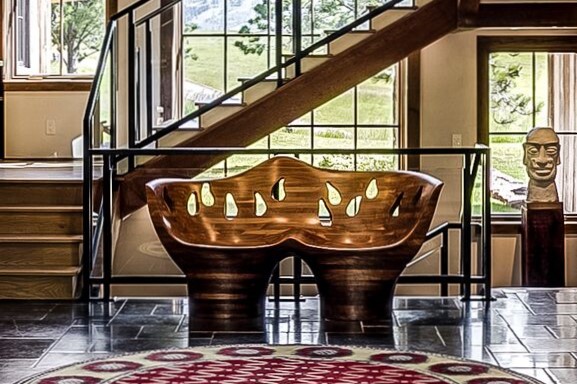 Sam Roberts wrote a lovely obituary in the New York Times for Wendell Castle. He quotes design guru Glen Adamson who said, “Wendell is the most important postwar American furniture designer, by a long shot.” Glen knows his stuff. He was the Executive Director of the... Trackcendence by Robert Chambers on view at Emerson Dorsch through July 6th, 2017.

This week there will be flooding of sorts in Miami. The leaders of major art institutions, collectors, great talents and influencers in the art community will pour into Miami for Art Basel and the array of fairs that happen alongside it. As always, it will an extraordinary coming together that illustrates the depth, intelligence, creativity, and culture we collectively cherish. Precious works have been shipped to our docks and one-of-a kind shows are being staged for just a short week in South Florida, a region dealing with the real effects of climate change. The high-powered art dealer Larry Gagosian says he bought it. The royal family of Qatar says it bought the sculpture, too. And now they are facing off in court over who owns Picasso’s important plaster bust of his muse (and mistress) Marie-Thérèse Walter, a star of the Museum of Modern Art’s popular “Picasso Sculpture” show.

A recent documentary about the celebrated collector Peggy Guggenheim has yielded fresh insights into her life and prompted a reassessment of how much the art world has changed since her heyday. Guggenheim died in 1979 at 81. For Peggy Guggenheim: Art Addict, the director Lisa Immordino Vreeland tracked down long-lost audiotapes of interviews that Guggenheim conducted in the 1970s with her official biographer, Jacqueline Bogard Weld. Notable for their subject’s clipped, sardonic replies, they form the revelatory backbone of the movie.